British Airways have painted a Boeing 777-200 ER in a special livery to commemorate the “GREAT Festival of Creativity” held in Shanghai in March 2015. The aircraft, bearing registration G-YMML sports a design showing a bamboo and a rose signifying “east meets west”

I got a chance to click a photo of this aircraft at Mumbai (BOM) as it was departing back to LHR. 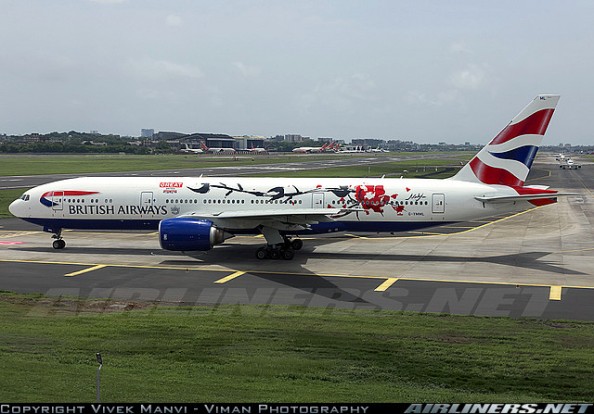 August 31st is Merdeka Day – Malaysia’s Independence Day. This national day sees a huge parade at the Merdeka Square in the capital city of Kuala Lumpur, followed by a flypast of Malaysian Air Force (TUDM) fighter aircraft, transport and trainer aircraft and helicopters.

The fighter aircraft fly in from their respective bases around Malaysia, whereas the transport aircraft take-off from the Sultan Abdul Aziz Shah airport, also known as Subang airport (SZB)

This year, the aircraft that flew in from SZB comprised of two TUDM Lockheed C-130 H Hercules transporters, nine Pilatus PC-7 trainers and for the first time ever – the newly delivered gigantic Airbus A400M Atlas.

I caught these aircraft as they departed from SZB on a hazy morning in Kuala Lumpur. Enjoy the photos…